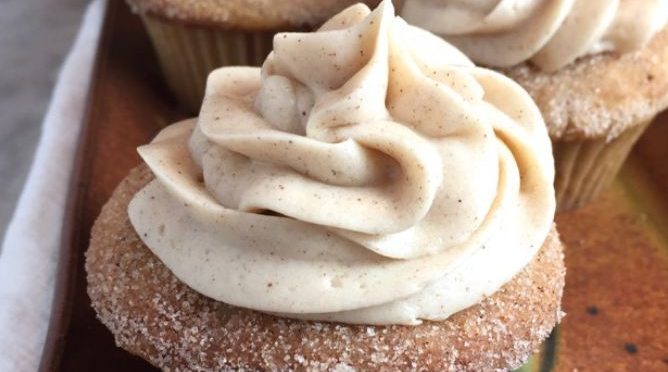 Preheat oven to 350 degrees, preferably on convection. Line 2 muffin pans with liners. Set aside.
In a medium bowl, whisk together both flours, baking powder, salt and cinnamon.
Using a stand mixer with the paddle attachment, cream butter and sugar on medium-high speed until light and fluffy, about 3 minutes.
Add eggs, one at a time, beating until each is incorporated. Scrape down the sides of the bowl as needed. Beat in vanilla extract.
Reduce speed to low, then add flour mixture in three batches, alternating with two additions of milk, and beating until just combined after each.
Fill each cupcake liner three-quarters full. Bake 17-20 minutes, or until cupcakes bounce back at the touch of a finger.
Remove cupcakes from oven and place cupcakes on wire racks to cool.
Meanwhile, make the cinnamon-sugar topping: Place the butter in a small bowl and microwave for 30 seconds, or until melted.
In another small bowl, combine the sugar and cinnamon.
When the cupcakes are completely cooled, brush melted butter on the tops and dip into the cinnamon sugar mixture, making sure to entirely coat the top of the cupcake.
Make the frosting: Using a stand mixer with the paddle attachment, beat butter and cream cheese until light and fluffy, about 2-3 minutes. Add vanilla and cinnamon.
Add confectioners’ sugar, one cup at a time, until incorporated and desired consistency is reached. If the frosting is too thick, add a teaspoon or so of milk to thin.
Using a pastry bag with a fluted tip, frost cupcakes. Be careful not to coat the outer edge of the cupcakes so that the cinnamon sugar can shine through.
Refrigerate until ready to serve.