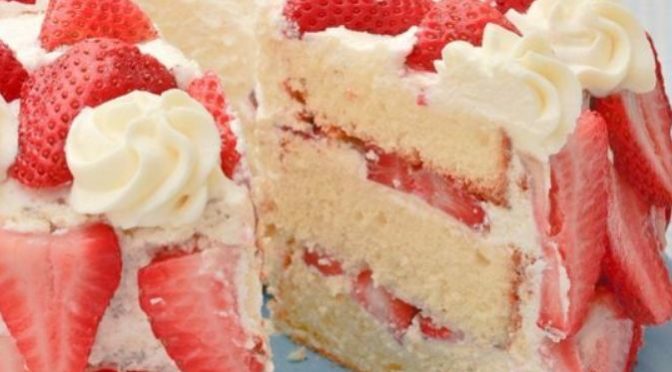 Directions :
Separate the eggs and place the egg whites in a large mixing bowl; let stand at room temperature for 30 minutes. (This helps them whip up better.)
Preheat the oven to 325 degrees. In another bowl, whisk the egg yolks until slightly thickened. Gradually add ¾ cup of sugar, whisking well until thick and lemon colored. Beat in the lemon juice, oil. and water. Combine the flour and salt and add to the yolk mixture.
Beat the egg whites on medium speed until soft peaks form. Gradually add the remaining (¾ cup) sugar, 1 tablespoon at a time, beating on high until glossy peaks form. Fold a fourth of the egg whites into yolk mixture. Then add the entire yolk mixture into the remaining egg whites and gently fold in. (only a few seconds on lowest speed of mixer.)
Gently spoon into an ungreased tube pan; smooth the top. Bake at 325 degrees for 35-45 minutes or until cake springs back when lightly touched. The top will be nicely browned. Immediately invert the pan; cool completely.

**For the whipped topping**
Put your mixing bowl in the fridge to chill; this helps the cream to whip up better.
In a large bowl, beat the heavy cream until it begins to thicken. Add the confectioners’ sugar and vanilla; beat until stiff peaks form.
Run a knife around the sides and center of the pan; remove the cake. Split into three horizontal layers. Place one layer on a serving plate; top with some of the whipped cream and sliced strawberries. Repeat.
Top with the remaining cake layer; spread remaining whipped cream over the top and sides of the cake. Arrange berries on sides and top of cake.
Keep refrigerated.

Can you send me the recipe of cheese cake, please…… I have