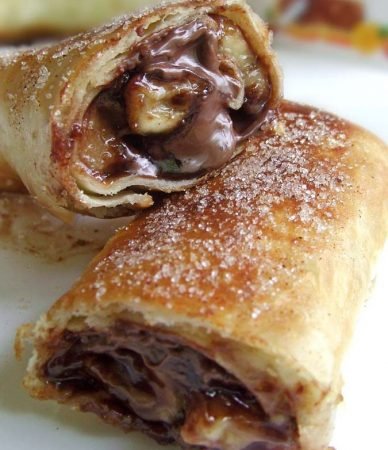 Nutella and Banana Chimichangas
Ingredients
Vegetable oil-for frying
6 medium flour tortillas (taco size, about 8″)
2-3 banana
6 tablespoons of Nutella
1 teaspoon cinnamon
¼ teaspoon cayenne pepper
For coating:
½ Tablespoon cinnamon
¼ cup sugar
Instructions
Warm the tortillas in the microwave or oven.
Mix cinnamon and cayenne in a bowl, Slice the bananas and put into the cinnamon mixture. Shake until the bananas are evenly coated.
Lay out tortillas, slather one tablespoon of Nutella in the lower third of each tortilla and add the spiced banana mixture in a small clump on top of the Nutella.
Next, fold the two sides of each tortilla toward the center and then roll the tortilla up like a burrito and secure it with a toothpick.
Repeat the rolling process with the remaining tortillas.
Combine the ¼ cup sugar with the cinnamon in a shallow bowl and set it aside.
In a 9″ cast iron skillet, heat the Vegetable oil-for frying until it reaches 360ºF on a deep-fry thermometer.
Working in batches, fry the chimichangas until golden brown and crispy, about 1 minute on each side.
Transfer the chimichangas to the paper towel-lined plate to drain for 1 minute, and then roll them in the cinnamon and sugar mixture.
Repeat the frying and rolling process with the remaining chimichangas, returning the oil to 360ºF between batches.
*Enjoy, be prepared to make more, these are delightful