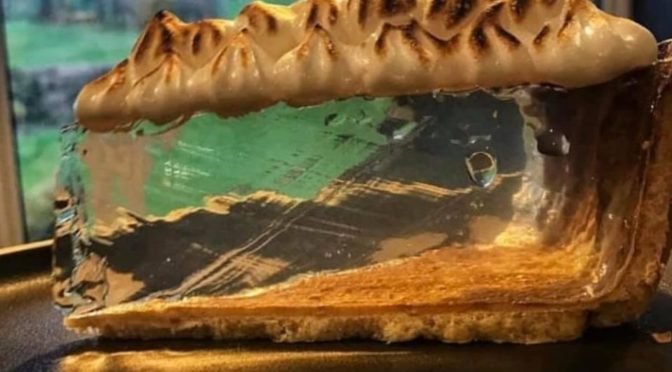 Firstly, I want to point out if you are going to attempt making this clear lemon meringue pie recipe (which of course I hope you do!) you are going to need patience, but it will be worth it. Also after filming the video and during editing, i’ve just experimented with a 2nd version of the jelly filling which is even stronger, so I am including that in this write up – so this will use gelatine powder, rather than gelatine sheets. Oh you will need a chefs blowtorch ideally to char the meringue. Also you should know that the day it’s made should ideally be the day you serve it as it probably won’t store that great.
First up lets get the base out of the way, either make the shortcrust pastry from scratch which i’ve done many times before on here, buy a ready made shortcrust pastry sheet (what i’m doing) or be super lazy and buy a ready made pie base – a lot of supermarkets sell these and you will save a considerable amount of time. Your call!

Lightly grease & line a pie dish (ideally a non-slip, loose bottomed one) with your shortcrust pastry, ensure to tuck it in and leave enough around the crust as it could shrink a little, you can trim this later. Prick the base with a fork, lightly. With the dish lined, line with baking parchment inside it and fill with baking beans. Place the pie in the fridge for 30 mins to cool the pastry down and pre-heat oven to 200c/180c fan or equivalent see temperature conversion charts.
Bake the pie until just starting to go lightly golden brown, remove from the oven and take out the beads and baking parchment, return to the oven and bake to cook the base and also make the rest of the crust golden brown. Remove to cool and let it cool fully. In fact, chill it in the fridge as soon as you can. See told you a pre bought crust would save a lot of time! Now this is optional but I spread the base of the crust with a little lemon curd to give an added lemon kick & I guess seal it, I think it alters the transparency a little bit & also gives a less grip of the jelly to the crust (it slides a little when slicing) but I like it although I don’t think it’s critical. Do this before placing the pie crust in the fridge.
Ok so the gelatin filling. This is going to get interesting. Mix the gelatine powder in a jug with just 3tbsp of the sugar only at first. Give it a stir with a wooden spoon before adding into the 120ml water. This will set pretty quickly into a weird orange clump, just leave it to do that, it’ll look weird but it’s fine! Add the sugar (it’s a lot, but hey i’m just experimenting here and it’s tasty, so go for a run) and half of the remaining water (500ml) into a saucepan, stir to dissolve whilst warming on the hob slowly. You do not want to boil the water, but warm it to literally just under a boil – you will see a sort of smoke coming off of the water, it’ll make sense when you do it, get it to that stage. Now push in that gelatine clump from earlier, don’t heat the water, just keep stirring it until the gelatine blob thing dissolves. At this point you can add the citric acid in and stir through. Finally pour the remaining 500ml cold water into the pan and stir, you could also flavour it with lemon extract now if you wish to taste. This may sound weird and it may look a little cloudy, but just leave the gelatine now, after 20/25 minutes, it should go clear again! You now need to let this cool down, the best way to accelerate this process is to pour it into a metal tray and place in the freezer for a little bit, just try to freeze / cool it until it is not watery, but slightly gummy if that makes sense. So it’s still able to pour, you then want to push this into the pie base, level and chill in the fridge ideally overnight. Make jellies with any leftovers!
Finally the meringue is made the next day (ideally when you want to make this thing). Whip 4 egg whites in a bowl with the cream of tartar, starting to whisk slowly then gradually increasing the speed until enlarged and peaks hold. Add the sugar in batches a few tablespoons at a time, whisking as you go, it should get glossy and dissolve into the mix. Do not over whisk, get all the sugar in there and you should be left with meringue that you can be proud of! Make a pavlova with any you have spare, but when ready, place a thin layer (remember we are not baking this!) of meringue on top, spiking it with a fork and then using the chefs torch to char the edges! Slice carefully and serve 🙂
It’s fiddly, but of course if it were that easy, everyone would do it! Good luck.