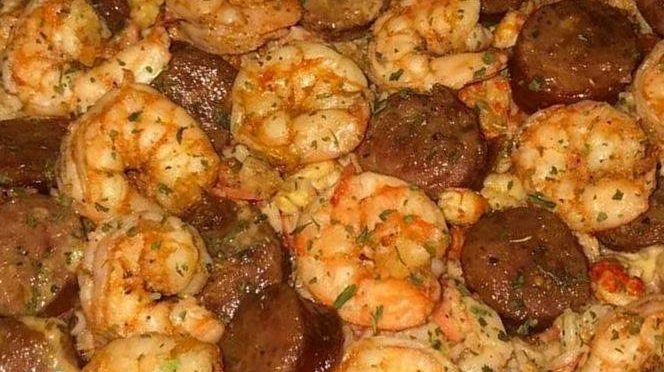 Directions
Preheat oven to 400 degrees
Fry down sausage on a medium to low heat until browned and then drain out grease.
Fill pot with 3 cups of water and pour in crawfish boil.
Bring water to a boil and boil potatoes and onions until potatoes are soft (but not mushy).
Once potatoes are done, turn off heat and add the shrimp and crawfish (if used), and stir in order to keep shrimp under broth (shrimp and crawfish will cook within 2 ½ minutes) Keep in mind that the longer you keep the onions, potatoes and shrimp in the boil, the spicier they will be.
If you are adding crab, I suggest you keep it separate and heat it in a small skillet with a dash of Old Bay, then place it on the bottom of the pan before placing the cooked sausage on the pan.
Place sausage and crab meat on the bottom of the pan
Strain the boil of shrimp, crawfish, potatoes, and onions.
Once strained place the boiled shrimp, crawfish, potatoes, and onion on top of the sausage and crab.

Making the Sauce
On a medium to low heat, pour the two cans of cream of celery soup into a pot, and add the Velveeta cubes.
Slowly add in ¾ cup of Milk while cooking the soup and cheese down (Take your time, you don’t want to rush the sauce and scorch it – Keep it a thick consistency, try not to let it get too runny)
Once the cheese is melted, remove the pot from the heat and let it sit for two minutes.
After two minutes, spoon the sauce over the pan of seafood and bake in oven at 400 degrees for fifteen (15) minutes.
Garnish with parsley
Serve with hot garlic bread or butter rolls!