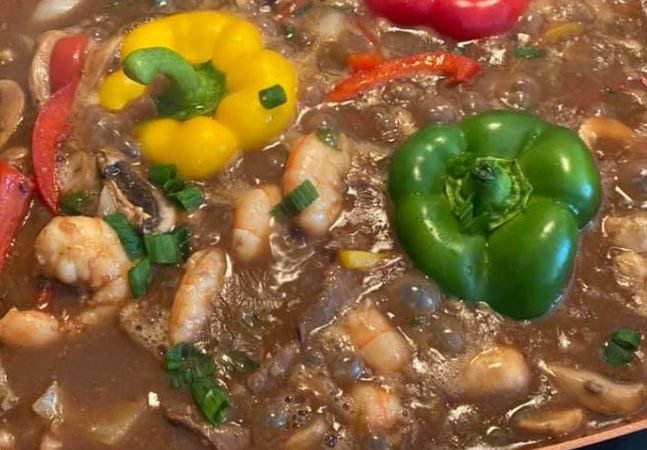 INGREDIENTS:
1 pound beef tenderloin, flank steak or flap meat, cut into pieces. I used tenderloin and it was expensive but it was SO tender and amazing.
1 pound shrimp, peeled and deveined
3 tablespoons cooking oil. I used coconut and sesame.
4 cloves garlic, minced
One 1 in (2.5 cm) piece fresh ginger, peeled and sliced
½ small green bell pepper, deseeded and cut into pieces
½ small red bell pepper, deseeded and cut into pieces
1 onion, cut into strips
6 ounces shiitake mushrooms
a bunch of snow peas or snap beans
1 teaspoon freshly ground black pepper
Salt, to taste
sriracha, of course
feel free to add in any vegetable you like – thinly sliced carrot or broccoli would work well in this!

DIRECTIONS:
Marinate the beef with all the Marinade ingredients, about 15 minutes.
Heat 1 tablespoon of the oil in a wok or skillet over high heat. Stir-fry the beef until the beef is browned on the outside but still pink inside. A good method for this is to layer the meat in a single layer and do not overcrowd – leave space between each piece. Do not touch for at least 2 minutes, let it brown. Then flip over and let cook for 2 more minutes. It should still be pink on the inside but browned on the outside. Dish out and set aside. Stir fry the shrimp in a similar manner and set aside. Shrimp cook much faster so limit it to 2 minutes total in the skillet.
Heat the remaining oil in a wok or skillet over high heat. Stir-fry the garlic and the ginger briefly until aromatic, and then add the green bell pepper, red bell pepper, onion, and black pepper. Stir-fry until you smell the aroma from the ingredients in the wok.
Transfer the beef back into the wok or skillet. Add a squirt of sriracha. Stir-fry until the beef is cooked through and the center of the meat is no longer pink, about 1-2 minutes. Dish out and serve immediately.