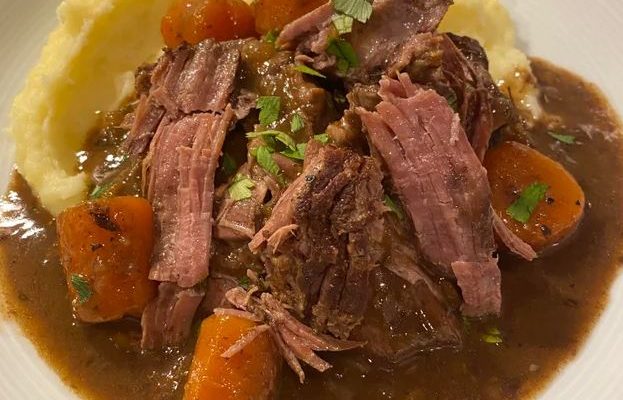 Place carrot slices in the bottom of a slow cooker. Cut the roast in half, season with salt and pepper, and spank some flour into the meat. This will help with browning in the next step.
Heat some olive oil in a pan on high heat then sear all sides of the roast halves. Place seared roast on top of the carrots. Pour in beef broth.
Add a hunk of butter to the pan and add the mushrooms. Cook until they start to release some of their liquid. Add onions and cook until they start to caramelize. Add garlic. Deglaze with wine and add a tablespoon or so of flour. Add Worcestershire sauce, thyme, rosemary, and bay leaf.
Pour the onion, mushroom, butter, flour mixture on top of the roast and cook on slow until the meat is fork tender. Took me about 11 hours on low. Temp of the roast was around 200 degrees F when finished.
Remove roast from the cooker and reduce the liquid until a nice gravy forms. Now is a good time to adjust seasoning. Add salt, pepper, more Worcestershire sauce, etc until it tastes good. Just be mindful that the flavor (and salt) will intensify as you reduce the sauce so maybe hold off on the salt until the gravy has reduced to your desired consistency.

EDIT: I feel like I’m missing something. I’ll update again if I remember. Honestly, I’m pretty drunk right now and it’s nearly 4AM my time.