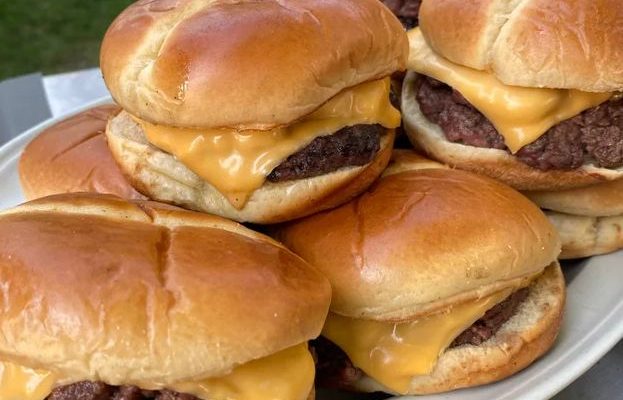 I use a flat cast iron griddle on the grill for the smashing
These look like smash burgers. Make 2 ounce patties, throw them on a hot grill, smash with a spatula, let them cook for a couple minutes, flip, add cheese, and put 2 or 3 patties on a pre-toasted bun. Will come out perfectly juicy and delicious every time. Don’t go cheap on the beef and make sure you use 80/20 beef.

when you press the beef down, if your spatula is warm at all, the meat will stick to it. your spatula needs to be kept cold. even then, turn the spatula 90 degrees before you pull it up and the burgers are more likely able to cleanly pull off of the meat.

I pop my griddle (hot plate) on the grill. Of course the griddle must be well seasoned to allow for an easy flip

Also you’ll want a spatula without any holes, so the meat doesn’t creep through when smashing

smashed gives really good crust. you’re literally smashing it on the flat cooking surface and scraping it off. if you do it right at the beginning the meat still is really juicy even as its generally cooked well done.

use a 2oz or 3oz, no bigger, ball of meat. press it down with a spatula on a hot metal pan (wont work on non stick). let it sit there and cook until you see browning around the edges. like crispy browning, not just the meat turning gray.

using the metal spatula, push and scrape it up from the pan. flip it, top with cheese and 30 seconds later it will be done. you can sprinkle some salt or pepper on either side, but just do one side.

So you cant do this on a bbq?

a bbq or an outdoor grill? you could, but you need a big flat surface to press this down on. regular grill or bbq grates won’t work. if you were able to put a big flat pan on a grill/bbq, you could cook these “smash burger patties” on that.