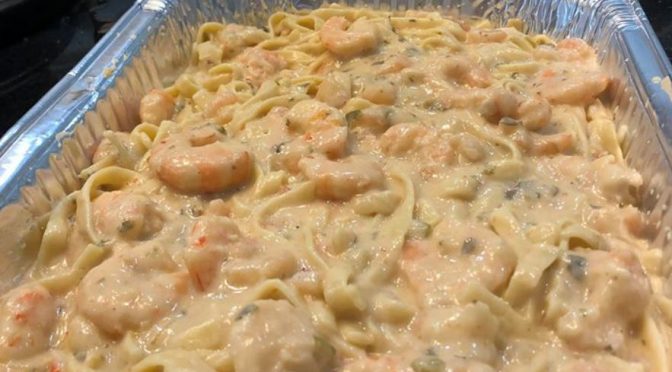 This 5-Ingredient Shrimp Alfredo is a cinch to make, takes under 30 minutes and tastes even better than anything you’ll find at a restaurant.

Instructions
Preheat oven to 350 degrees. Bring a large pot of water to a rolling boil. Season with salt, it should taste as salty as sea water.
Melt 1 teaspoon butter. Pat shrimp dry and toss in butter. Season liberally with salt and pepper. Place on a baking sheet and roast in the oven for 8 minutes or until pink. Set aside.
While the shrimp cook, add butter to a large saute pan. Melt over a medium heat. Whisk in heavy cream and salt. Bring to a simmer and cook for 3-4 minutes minutes until thickened.
Add pasta to the boiling water. Cook until aldente.
Turn the heat on low and slowly whisk in cheese until it’s completely melted and the sauce is creamy. Season to taste with salt and pepper.
Once the pasta is done cook, use tongs to transfer to the sauce. Reserve cooking liquid. Toss the pasta with the sauce until coated. If needed, add a little bit of cooking liquid to get sauce to desired consistency. Only add about a tablespoon or so at a time, to prevent the sauce from becoming too thin. Season again to taste with salt and pepper. Add shrimp. Toss and serve.
Garnish with extra parmesan cheese.