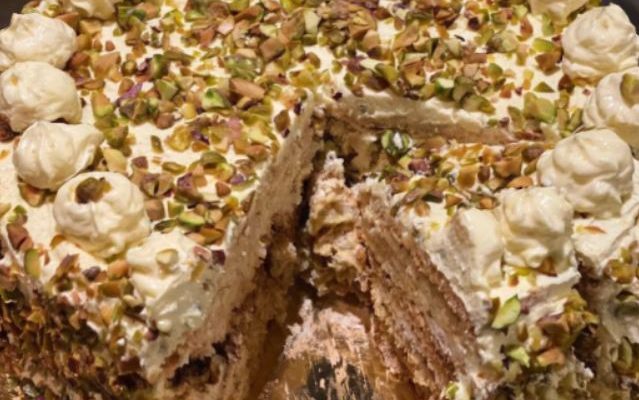 * To make the meringue, start by beating the egg whites until soft peaks form, then gradually add the sugar, and after each addition beat well to incorporate. Beat the egg whites until they become very stiff.
* 2 At this stage, fold in the pistachio nuts and vanilla, then thinly spread in three greased and floured 19X15-inch cooking sheets. Bake in an oven preheated at 300°F for 30-40 minutes, or until golden brown. While still hot, transfer the meringues out of the baking sheets on a flat surface to cool.
* Making the buttercream
* 3 For the French buttercream, first, boil the sugar and water until a syrup-like consistency and beat the egg yolks well until thick.
* 4 Pour the still hot sugar syrup in thin streams to egg yolks while beating and then leave to cool.
* 5 Cream the butter and add to it the egg yolk mixture and rum; mix to make sure they are well blended.
* 6 Assemble the cake by coating each of the meringue layers with cream and placing them one on top of the other. Spread the cream on top and the sides of the assembled cake and sprinkle with chopped cashew nuts. Leave to chill before serving.