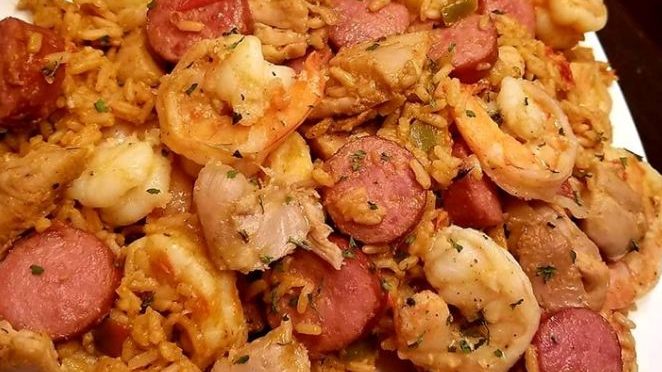 This Slow Cooker Jambalaya is a great way to make this New Orleans favorite with less effort! It’s loaded with shrimp, chicken, sausage, and Creole seasonings.

Cook on high for 3 hours or on low for 4 to 5 hours. You are ready to move onto the next step when the veggies are very tender and the chicken is cooked through and you can pull it easily apart.

How to Make Jambalaya slow cook the chicken, shrimp and sausageEasy Jambalaya Recipe jambalaya after several hours with chicken and sausage

2 Add the shrimp and cook on high: Leave the shells on the shrimp, but use kitchen shears to cut up the backs; this will make them easier to peel later.

Add the shrimp to the slow cooker. Stir it in, cover, and cook on high for another 30 to 45 minutes until the shrimp are cooked through.

3 Cook the rice: While the shrimp cooks, cook the rice either according to the package directions or following this boiled rice method. When done, set the rice aside, covered, until ready to serve. (This makes about 4 cups of cooked rice.)

3 Taste and season: Remove bay leaves from the jambalaya and taste. Season with salt and pepper to taste and garnish with fresh chopped parsley. Either peel the shells off the shrimp now, or serve with the shells on and instruct guests to remove the shells as they eat.

Leftovers will keep in the fridge in air-tight containers for 2 to 3 days and then the shrimp start to really break down. This dish doesn’t freeze particularly well. The combination of rice, shrimp, and sauce doesn’t reheat easily without making the shrimp very rubbery.