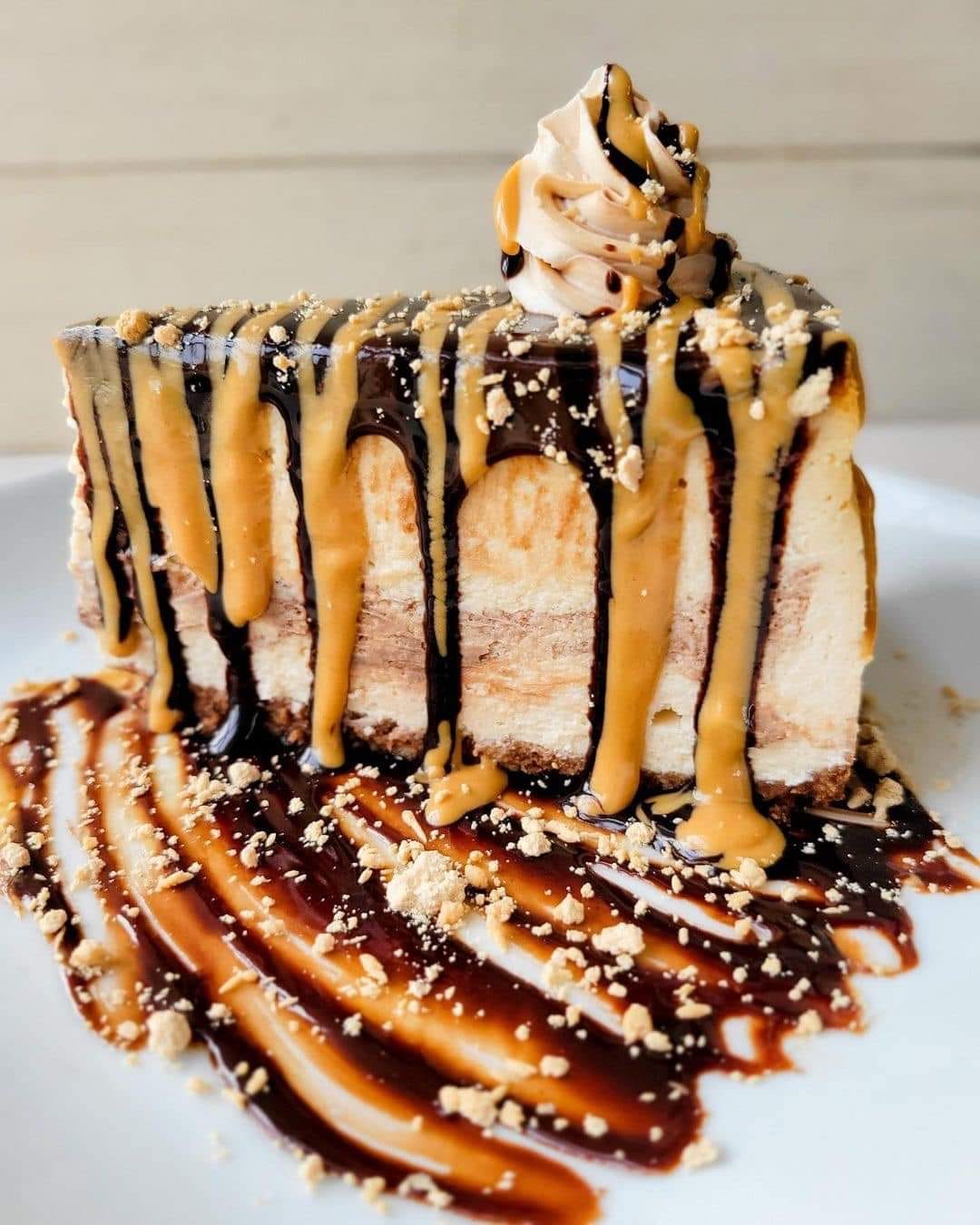 The original Tower of Death Cake has been for years one of my most popular desserts for those willing to take on such a feat of excellence!

Also known as the Death to Diets cake you can quickly see why!

I will issue an early warning though

DEATH BY PEANUT BUTTER FUDGE BROWNIE CHEESECAKE IS NOT FOR THE WEAK!

Nor is the eating of these cakes as a matter of fact, since they are aptly dubbed The Death to Diets Cake(s)

AS THE NAME SO BEAUTIFULLY DESCRIBES THIS TOWERING CAKE

Made from layers and layers of brownies, cheesecake, peanut butter fudge and both dark ganache chocolate and light buttercream filling.

Clouds of peanut butter buttercream and ganache drips makes this cake perhaps the most diet disastrous than any of them!

All of the recipes below *except for the peanut butter fudge can be made as far in advance as 4-5 days.
Just keep everything wrapped well and refrigerated until you are ready to build the cake

For the Peanut Butter Fudge:

Prepare 4- 7″ cake pans with professional bakery pan grease & parchment paper lining.
Prepare the cheesecake batter by placing all of the cheesecake ingredients into the work bowl of your food processor and pulse to blend

Divide the batter equally into 2 portions and pour into the greased & parchment lined cake pans and bake in a water bath in a preheated 350°F oven for 40 minutes.

Prepare the brownie as per the instructions on that recipe and divide this batter into 2 equal portions into the other 2 cake pans.

Bake with the cheesecake layers at 350°F for approximately 30 minutes, I like to keep my brownies slightly under baked **optional

Keep the cheesecake in their pans until ready to build the cake.

Prepare the buttercream recipe as per the recipe instructions on that post and add ¾ cup cocoa powder at the last stage of mixing for a chocolate buttercream.

Start building the cake by setting up a cake ring mold lined with an acetate cake strip or a springform pan with no bottom attached.

Unmold one of the cheesecake layers directly onto the first brownie layer and then pour half of the peanut butter fudge over top.

Allow it to set and then repeat the exact layering process with the remaining brownie, peanuts, cheesecake and peanut butter fudge.

Refrigerate to set for at least 1 hour then remove the cake ring and acetate strip and ice the cake with the remaining chocolate buttercream.

Ganache drips and large rosettes of chocolate buttercream for the garnish

Additional roasted peanuts for the bottom border garnish and then place the ganache dipped fudge triangles on each piece.