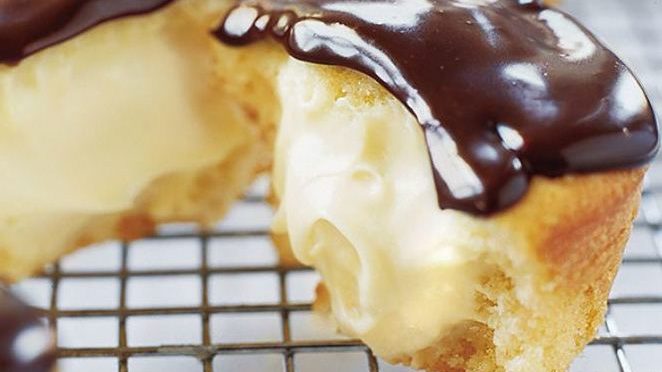 (NOTE: this pudding mixture tastes like pastry cream..it can be used as a filling for a fruit tart or other pastry calling for cream filling such as cream puffs.)

1.Make cupcakes/cake according to directions on box. Use your favorite yellow cake, ours is Duncan Hines. Let cool.
2. Mix together pudding, cream, powdered sugar, milk, and sour cream. Beat on medium speed until stuff peaks form. For cupcakes, cut each cupcake in half and add a dollop of filling. Put top back on cupcake and frost with ganache. I am making it as a whole cake, so the entire filling is going over one layer and the second layer of cake will be covered in the ganache
Ganache:
1 cup heavy whipping cream
12 oz semi-sweet chocolate chips
Heat cream in sauce pan until it comes to a boil. Remove from heat, pour over chocolate in a mixing bowl. Stir to mix together. Let cool slightly.
Keep in refrigerator until ready to serve.