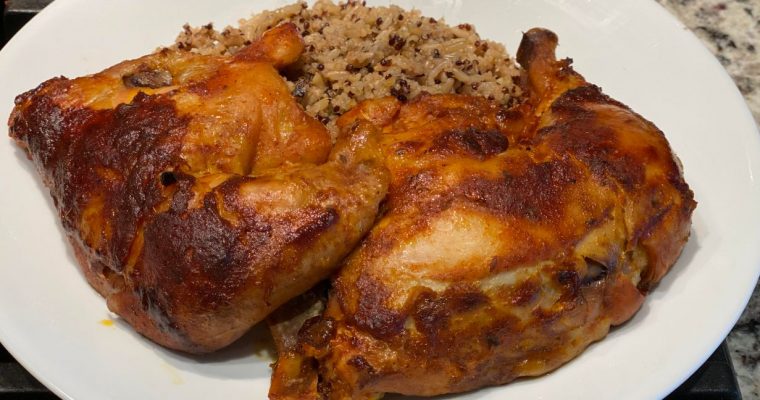 Tried a little at breakfast but it was really for a reheat at lunch.

Honestly the laziest chicken of my life. I had a jar of simmer tiki masala sauce I poured over the chicken & cooked on high for 3 1/2 hours overnight. Then it went to warm until this morning & came out like this. Somehow it had a bit of crispy skin. Totally baffled.
It was 3 hindquarters but probably a chicken worth of weight. But yes I poured a jar of tika masala on & went to bed.
I poured it over but it wasn’t so much that it was totally submerged. Most ran off so the bottom was in the sauce but the top was only coated. I’m not sure if it would work the same another time. This was my first time cooking chicken in tiki masala sauce in the crock pot. This is the only time I’ve had crispy-ish skin from a crockpot cook. I really didn’t know it was possible until now. I’m not sure if that baste amount of sauce was just enough along with the high heat? That’s my only guess.
Very possible. It did look a lot like this at like 2:30/3am. Granted I only peeked at the very top so I don’t know when the sides turned out like that. & I don’t know if the skin would’ve actually been crispy at that time. I was tired & was really only up to potty. But I was shocked to see what was happening at that time. It all started around 10pm.
I hope it works the same! I “Pataks original” tiki masala curry simmer sauce. It was very reasonably priced
It seemed like the fat mostly rendered into the tiki masala sauce. We mostly ate it this for lunch so I refrigerated the sauce too. A lot of the fat separated to the top in the fridge. So it could be discarded. We didn’t end up using much of the sauce anyway though.
My crockpot automatically switches to keep warm after the timer runs out. I set it on high & set the timer for 3 1/2 hours. It automatically switched to warm when the timer ran out. Was in the crockpot about 8 hours total.