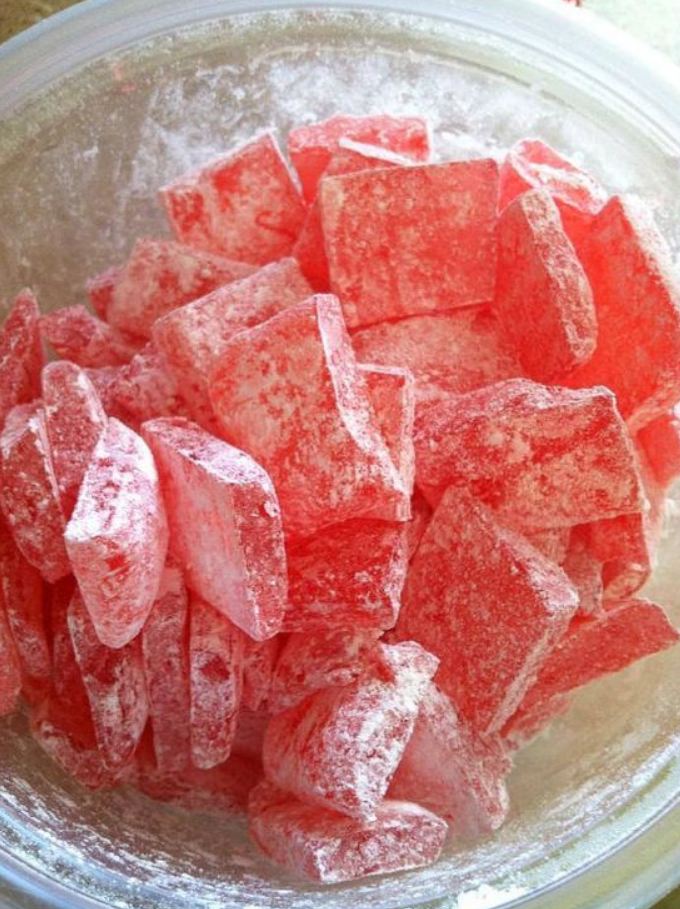 My mother taught me how to make rock candy with this hard cinnamon candy. Now I fix it for my own family and to give as gifts at Christmas..

I learned to make Cinnamon Rock Candy after my husband and I became married. He has wonderful childhood memories of his Grandmother who would make this for him during the holidays as he grew up. She is such a wonderful woman and will be turning 100 in January! Simply amazing to me.

So now I carry on her tradition for my husband and our own children of having the cinnamon rock candy!

Make sure to use Cinnamon Oil. Cinnamon flavor will not be strong enough. Cinnamon oil can usually be found at craft stores or specialty stores with the candy making supplies.

1 butter a 15 inch x 10 inch x 1 inch sheet cake pan. Line the pan with parchment paper and butter the parchment paper, making sure the edges of the parchment paper are well buttered to prevent the candy from seeping underneath.
2 in a large deep sauce pan combine water, sugar, corn syrup and food coloring. Mix over medium high heat until sugar starts to dissolve. Attach a candy thermometer to the side of the pan making sure it does not touch the bottom of pan for an accurate temperature. Continue to boil until sugar mixture reaches 300°F (hard crack stage) – about 20 minutes. Watch closely, if mixture starts to boil too close to the edge of pan remove pan from heat and stir until bubbles subside and then return to medium high heat.
3 Once mixture reaches 300°F remove pan from heat and stir in the cinnamon oil, working quickly. Keep your face away from the mixture as it is strong like onions and keep the work area well ventilated. Pour immediately into prepared pan. Allow to cool for 4 hours.
4 after 4 hours dust the top of the candy with powdered sugar. Flip candy over onto a large cutting board or cookie sheet and remove parchment paper. Return candy to the pan and use the tip of a sharp knife to break candy into bite size pieces. Dust with more powdered sugar and store in a airtight container.