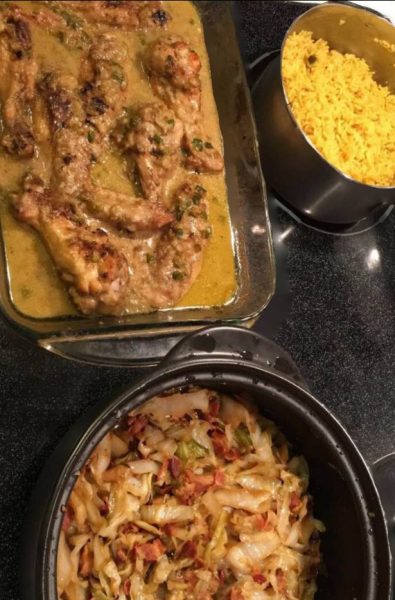 Rinse your turkey wings & pat dry, season generously to taste, put some flour in a big ziploc bag, put wings in a couple at a time & make sure they are well coated w the flour (dont toss the extra flour you will use for roux later on), throw some vegetable oil & butter in a large pan, make sure its nice & hot, brown all sides of your wings & remove them from pan & place them in a large baking dish, chop up some onion, bell pepper & celery & season & sauté them in the same pan you used to brown the wings until they’re translucent. Throw the veggies on top of the wings & cover with foil, bake at 325 for 2 hrs. For the gravy, melt a couple tablespoons of butter & add some of your left over flour to make a roux & stir continuously until its a nice brown color (not dark tho), pour some chicken broth (a couple cups) in & stir to make sure its not lumpy, add in some half & half or heavy cream doesnt matter & let the gravy cook until it starts to thicken up, take the wings out after the 2 hrs, pour gravy over wings, cover again & cook for another hour. The meat will literally fall off the bone it is so delicious, I eat mine with hot sauce on top.